We're The Famous Crystal Palace And We're Off To Wembley 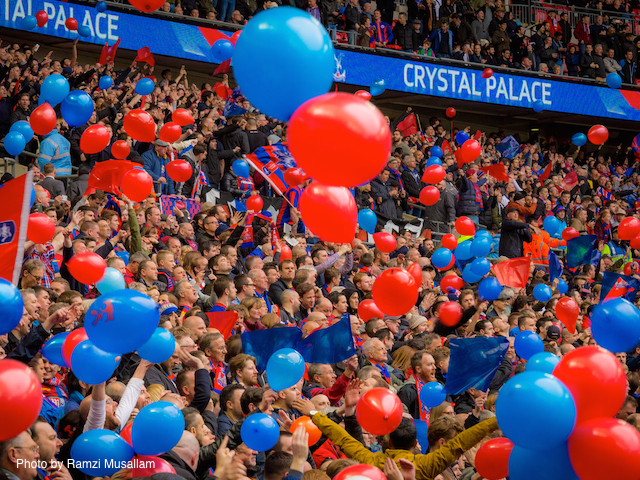 It is testament to the development of Patrick Vieira’s exciting Eagles that our imperious 3-0 victory over Arsenal was met with an air of acceptance, with many pundits and fans alike predicting a Palace victory given the South Londoners impressive record against the supposed top six throughout the season. Tottenham were likewise disposed of 3-0 whilst Palace also held champions Manchester City under the Selhurst Park lights.

Add to this a narrow defeat against European Champions Chelsea and a spirited and perhaps unfortunate 3-1 defeat to Liverpool, a result in large part down to incompetent refereeing (coincidentally Kevin Friend has not officiated a Palace game since his mystifying antics). A further point away to Arsenal and another three at the Etihad suggests that Palace have become accustomed to competing against the big boys.

What a contrast this was to the reception that greeted our famous other 3-0 victory at home on a Monday Night to the Gunners under Sam Allardyce where goals from Andros Townsend, Yohan Cabaye and Luka Milivojevic all but ensured Palace’s Premier League status for a fourth straight year. Yet now, following several more years of safety securing victories, Palace have evolved beyond basement battlers and are now asserting themselves as a consistent, confident top flight outfit which attacks challenges with intent and purpose. This renewed ambition is the product of Vieira’s tactical insight and a hungry batch of adventurous players whose efforts have now been rewarded with a heralded trip to the home of football.

Inevitably, several links have been made between this year’s FA Cup run and that of 2016, where Alan Pardew was the manager that guided Palace to Wembley. That year’s march to the final saw unexpected away wins to both Tottenham and Southampton whilst Premier League Stoke and Watford were similarly eliminated with a tricky Quarter Final at Reading also negotiated before that fateful final against Louis Van Gaal’s Manchester United where the Reds were so elated with their success, they sacked their manager the following day. 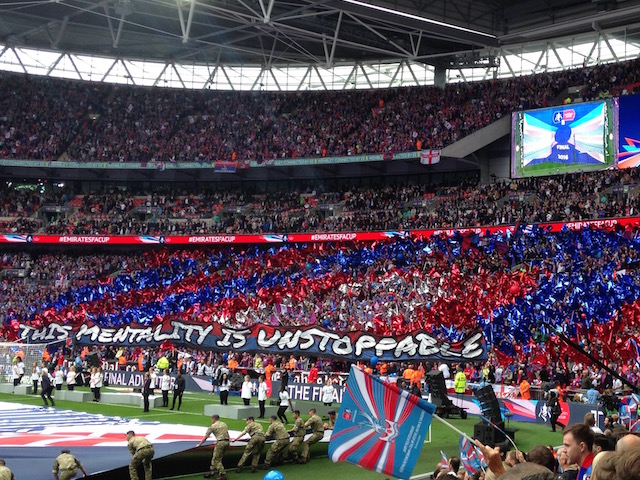 This provides something of a contrast to the opponents that Palace have faced this season with only one all premier league tie so far against a particularly poor Everton side devoid of imagination. Two home ties against Hartlepool and Stoke were successful despite the latter game’s severe lack of quality whilst the toughest test came in the Third Round against South London rivals Millwall, where a Michael Olise inspired Eagles came from behind to win in a bitter battle at the Den.

Yet the recent string of cup matches for the Eagles have been complimented by excellent league form, a fact which cannot be mirrored by the team which achieved this feat six years previous. From January to May in 2016 Palace won just two league matches and plummeted from an incredible 5th place on New Year’s Day to 15th following the final match of the campaign away to Southampton, a 4-1 defeat which rounded off a miserable start to the calendar year in the League.

It seemed as if Palace were able to harness the magic of the cup that season, defying all the odds to pass several tests on the way to the show piece final. But it isn’t just cup magic which surrounds Vieira’s current squad, as form in the league has surpassed many supporters’ expectations as the Eagles currently sit in the top half. In terms of top flight longevity the past ten years have been amongst the very best in the history of the Football Club and it was nearly marked with the club’s first ever piece of silverware in 2016. Despite an extremely difficult challenge to come against Chelsea and then either Liverpool or Manchester City in a possible final, Palace fans have reason to believe that this current crop could succeed in winning that elusive first trophy, and cement this period as the greatest experienced in SE25.

Still, the bookmakers would rightly make you believe that the odds of Palace going all the way are implausible and this realism must be considered before heading to north London. Palace are the underdogs and that’s the way we ought to like it. The Eagles have lost all of their last nine fixtures against the Blues, with the last coming in the 2017/18 season where Wilfried Zaha secured the points in a 2-1 victory.

This season hasn’t been much better, with a 3-0 defeat on the opening day, but as an indication as to the improvements in the team, Chelsea needed an 88th minute winner from Hakim Ziyech to see off the Eagles at Selhurst Park 1-0 in what was a close February encounter. If that highlighted potential weaknesses in Thomas Tuchel’s outfit, they were fully exposed recently on the 2nd of April as Brentford tore them part 4-1 at Stamford Bridge through a display of immense counter attacking quality.

Perhaps this will be the way Palace look to exploit Chelsea, via utilising the pace on the wings with Palace’s rear guard soaking up pressure before releasing wonderful wingers Wilfried Zaha and Michael Olise. Maybe they will employ a different approach by utilising the ball and maintaining substantial possession? Maybe Palace will seek to make the most out of Jean Philippe Mateta’s aerial presence?

Whatever formation or strategy that Vieira utilises he is sure to have the full backing of the loyal Palace followers that have become endeared to his style which has allowed the Palace fans to dream. And for good reason.